Dengue: a glossary of terms in German and English 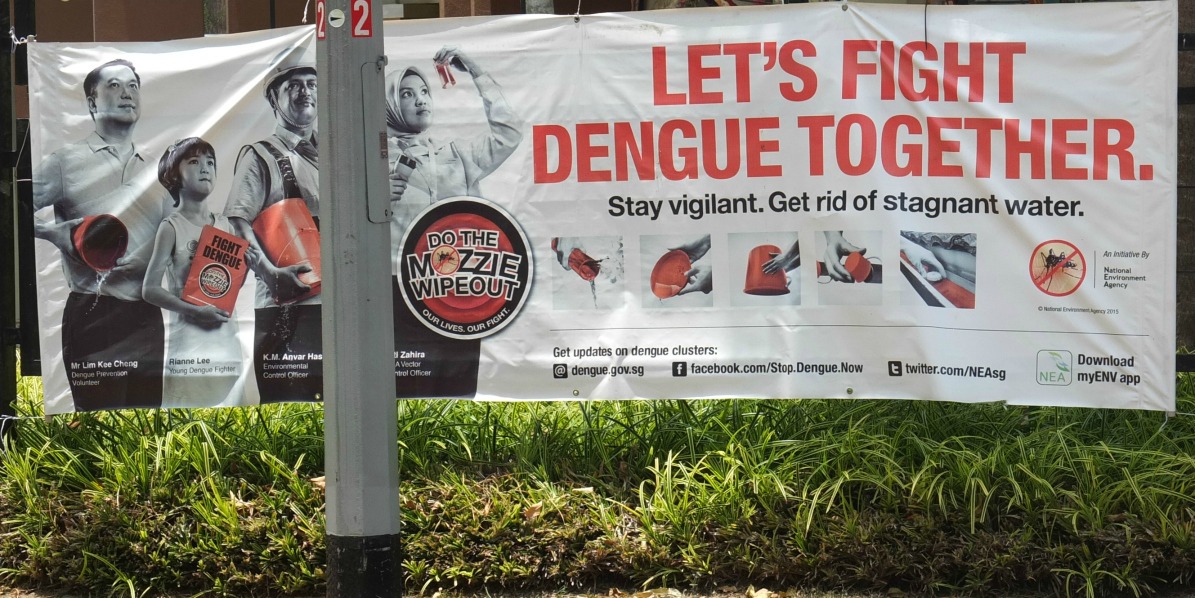 There is currently an outbreak of dengue in Singapore, where Imke, one of our writers, recently spotted this poster. As well as transmitting the Zika virus, Aedes mosquitoes also transmit the viruses that cause dengue. In this latest article in our series on infectious diseases, we have put together a German-English glossary of terms relating to dengue.

Dengue is caused by four related virus strains called serotypes, known as DEN-1, DEN-2, DEN-3 and DEN-4. According to the World Health Organization (WHO), it is widespread throughout the tropics and leads to an estimated 390 million infections each year. It is transmitted by female mosquitoes who have bitten infected humans. After an incubation period of four to ten days, an infected mosquito can transmit the virus for the rest of its life.

Unlike malaria, dengue and Zika are both transmitted by mosquitoes that are most active during the day (Aedes aegypti and Aedes albopictus). The incubation period is four to ten days after being bitten by an infected mosquito.

A high fever, which may be biphasic (with two peaks), is common in all four dengue subtypes. The sudden onset of fever (40° C/104° F) in dengue is accompanied by severe headache, muscle and joint pain, nausea, vomiting, swollen glands and generalised rash. The combination of fever, rash and headache is known as the ‘dengue triad’. Pain behind the eyes is another classic symptom, along with severe pain in the bones, joints and muscles that give the disease its nickname of ‘break-bone fever’.

The fever reduces below 38 °C/100 °F) after three to seven days. Warning signs and symptoms at this stage include severe abdominal pain, persistent vomiting, blood in the vomit, rapid breathing, bleeding gums, lethargy and restlessness.

These signs are indications of a serious form of the disease known as severe dengue or dengue haemorrhagic fever (DHF), which is accompanied by bleeding in the gastrointestinal tract. Dengue shock syndrome (DSS) is another form of severe dengue with DHF signs plus circulatory failure. The risk of severe disease is higher in new or parallel infection with another dengue subtype, which can be particularly life-threatening for children.

You can find more terminology relating to viral infections in our German-English glossaries of Zika virus terms and flu terms.

Treatment for dengue depends on the symptoms. Aspirin is contraindicated due to the risk of internal bleeding. Travellers should not take aspirin for headache or flu-like symptoms in tropical areas where dengue fever is endemic or where there has been a recent outbreak. This also applies to travellers returning from these areas.

Dengue haemorrhagic fever and dengue shock syndrome are life-threatening forms of the disease. Without intensive care and compensation of fluid loss in particular, the mortality rate of DHF is 20%. Even with adequate treatment, 1–2.5% of hospitalised patients die.

Dengue viruses are most commonly transmitted by Aedes aegypti mosquitos, which are most active in the early morning and just before dusk. Aedes albopictus can also transmit dengue viruses. The best prevention is elimination of mosquitoes (by removing breeding sites) and protecting yourself from mosquito bites. Use mosquito nets and/or screens, wear long-sleeved, light-coloured clothing that is not too tight, and use insect repellents containing active ingredients such as DEET or icaridin.

There are a number of factors to consider when choosing an appropriate repellent, especially for children and pregnant women. DEET provides long-lasting protection but it can damage plastics such as smartphones, sunglasses or water bottles.

Humans are the main carriers of dengue viruses. Major epidemics occur every three to five years in affected areas, usually during or after the rainy season. The high number of carriers increases the risk of infection at these times.

A dengue vaccine has recently been approved in Mexico, the Philippines and Brazil, and is currently awaiting approval in Thailand.

This article is part of a series of German-English glossaries on infectious diseases. Have a look at the other articles in the series:

Original article by Imke Brodersen, English-German medical translator. English glossary terms and references by Jayne Fox. Translated  into English by Jayne Fox, German-English medical translator and editor. I’d love to hear your thoughts on this article. Head over to Google+ or Twitter to continue the conversation!